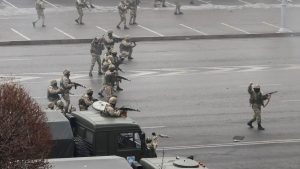 Photo: Almaty, Kazakhstan – January 6, 2022: Security forces are used in a counterterrorism operation to stop mass unrest. Protests were sparked by rising fuel prices in the towns of Zhanaozen and Aktau in western Kazakhstan on 2 January and spread rapidly across the country. Following a meeting between a government commission and protesters, the price for liquefied petroleum gas went down from $0.27 to $0.11. On 5 January, President Tokayev dismissed the cabinet and declared a 2 week state of emergency in the Mangistau and Almaty regions, as well as in the cities of Almaty and Nur-Sultan. Credit: Valery Sharifulin/TASS.