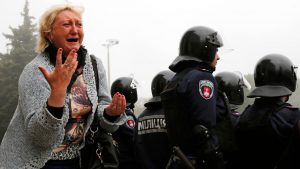 Photo: A woman reacts outside a trade union building, where a deadly fire occurred, during a rally in Odessa, May 3, 2014. At least 42 people were killed in street battles between supporters and opponents of Russia in southern Ukraine that ended with pro-Russian protesters trapped in a flaming building, bringing the country closer to war. The riot in the Black Sea port of Odessa that ended in a deadly blaze in a trade union building was by far the worst incident in Ukraine since a February uprising that ended with a pro-Russian president fleeing the country.
Credit: REUTERS/Yevgeny Volokin