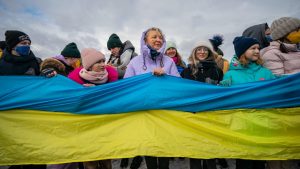 Photo: People hold a long ukrainian flag in a nationalist march along the Paton bridge during the celebration of the Day of Unity in Kiev, Ukraine. On January 22, 1918, the Universal of the Central Rada proclaimed the independence of the Ukrainian People’s Republic, and on January 22, 1919, an Act of Unification of Ukrainian lands into a single Ukraine was declared in Kyiv. Credit: Celestino Arce/NurPhoto