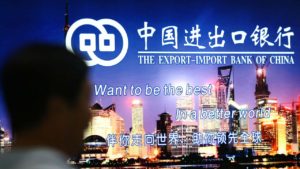 Photo: A pedestrian walks past an advertisement of The Export-Import Bank of China (China Exim Bank) in Shanghai, China, 4 November 2014. The Export-Import Bank of China is joining China Construction America Inc. in seeking a dismissal of Baha Mar’s chapter 11 of case, showing a unified front against the Bahamas resort’s restructuring bid. The Chinese bank, in its first official move in the resort’s U.S. bankruptcy case, filed the motion to dismiss the chapter 11 case on Monday (27 July 2015). “Because this Court lacks the ability to bind the Bahamian Government and other foreign creditors over whom this Court has no personal jurisdiction, there is no possibility of a successful reorganization here,” lawyers for the bank said in documents filed with the U.S. Bankruptcy Court in Wilmington, Del. The bank, which has lent the project $2.4 billion, goes on to say that a dismissal “will clear the path to an efficient and fair restructuring of the Bahamian Debtors under Bahamian law with the full support of the Bahamian Government and Bahamian courts.”