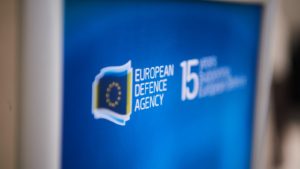 On 25 June, EDA celebrated its 15th Anniversary with a ceremony in its premises attended by the Head of the Agency, Federica Mogherini, high representatives (Ministers, Deputy Ministers, State Secretaries, Chiefs of Defence, Ambassadors) from its 27 Member States and the four associated countries, the Chairman of the EU Military Committee, Deputy Secretary-Generals of the EEAS, the Director General of the EU Military Staff, a European Commissioner and Commission Director-Generals, Executive Directors and senior officials of all EU institutions and agencies, NATO senior representatives as well representatives from the European defence industry and the media.