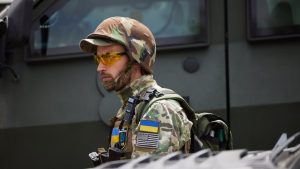 Photo: An Ukrainian soldier stands guard as president Volodymyr Zelenskiy visited the city of Mykolaiv on the Black Sea coast on Saturday June 18, 2022. His visit followed a military strike on Mykolaiv on Friday, which killed at least two people, according to the Mykolaiv regional administration. Images released by the Presidential office showed Zelenskiy, alongside the head of the regional military administration Vitaliy Kim and his team of officials visiting the ruins of the administration\’s building. The building was destroyed by Russian shelling in April, which killed at least 34 people. The Ukrainian President also presented medals and honors to Kim, other regional army officials and fighters. Credit: Eyepress Media.