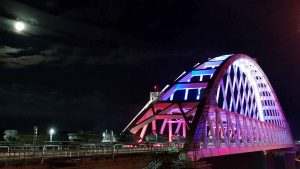 Photo: Image grab from footage released by Moscow on Wednesday Feb 16, 2022 shows a train carrying Russian military armored vehicles passing through the Kerch Strait in Russia, departing from Crimea. Moscow said the units of its Southern military district started returning to their bases after the completion of military exercises in Crimea. departing from Crimea. Units of logistics formation of the Southern Military District after the end of the events of the combat training have set off on march by ordinary transportation to points of permanent dislocation, said a statement by the ministry. Russia\’s defense ministry said on Tuesday (February 15). The ministry spokesman Igor Konashenkov said that while large-scale drills across the country continued, some Southern and Western military districts units had completed their exercises and started returning to base. U.S President Joe Biden welcome the move but said the pullback has not been verified in a televised address to America on Tuesday. Credit: EYEPRESS MEDIA LIMITED.