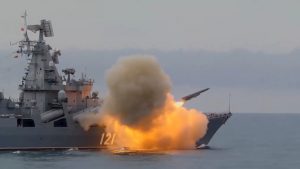 Photo: File image of Russia Black Sea flagship Moskva (Moscow). Moskva, the flagship of Russia\’s Black Sea Fleet, was being towed to port when \”stormy seas\” caused it to sink, according to a Russian Ministry of Defense statement on Friday April 15, 2022. However, Ukraine claims that the warship was hit by two anti-air Neptune surface-to-sea missiles (range 300 km), about 25 nautical miles from Snake Island. The 510-crew missile cruiser was a symbol of Russia\’s military power, leading its naval assault on Ukraine. The 12,490-tonne vessel is the biggest Russian warship to be sunk in action since World War Two. Ukrainian military officials said they struck the Moskva with Ukrainian-made Neptune missiles – a weapon designed after Russia\’s annexation of Crimea in 2014, and the naval threat to Ukraine in the Black Sea grew. The ship\’s sinking was described by the US as a big blow, but American officials were unable to confirm whether Ukrainian Neptune missiles were responsible. Credit: Russia MOD/EYEPRESS.