Photo: A view shows an information board during a check-in for a flight of Belavia Belarusian Airlines heading to Minsk, the last one before Ukraine stops air travel with Belarus following the arrest of dissident journalist Roman Protasevich, at Boryspil International Airport outside Kyiv, Ukraine May 25, 2021. Credit: REUTERS/Valentyn Ogirenko
May 25, 2021

The West needs to look beyond the current crisis.

The extraordinary operation by Belarusian security agencies to force down a Ryanair flight in the gunsights of a MiG-29 fighter and arrest an independent editor has forced the European Union (EU) and its allies to consider a range of responses, including bans on landing rights for Belarusian planes and halting overflights through its airspace.

Yet, drastic as these measures are, they mainly serve the Belarusian and Russian regime’s goals: to further isolate Belarusians by alienating them from Europe. The West needs to look beyond the current crisis, and go beyond its existing demand for the release of political prisoners.

In just a few days, on Friday (May 28), Belarusian strongman Aliaksandr Lukashenka will meet his counterpart, Russia’s Vladimir Putin. This is their third meeting since the beginning of the year, and each leaves a trail of unfinishedness lingering in the air. The special “maps” of further integration between Belarus and Russia are discussed, but nothing has been signed. Russia’s plans to absorb Belarus have until now faced two obstacles: they are not very popular among Belarusians, and Lukashenka has no desire to share power.

Lukashenka is keen to keep untrammeled personal influence, while Russia seeks to guarantee a predictable pro-Kremlin partner in Belarus beyond his rule. Responding to the latter, Lukashenka has staged a show for his Moscow friends. Last year, he initiated a review of the constitution, but his recent Decree #2 provides an almost unlimited mandate to the Security Council in the event of the president’s sudden death or forced removal from office. The message seemed to be that Lukashenka does not foresee a standard change of regime at least within his lifetime.

For the last 26 years, Lukashenka was able to keep his special status by balancing between Europe and Russia. Each election was accompanied by a wave of repression and led to temporary freezing of relations with the EU, until a subsequent relative liberalization and thaw. This was tolerated by the Belarusian society, which is not clearly pro-Western or pro-Eastern and prefers good relations with all neighbors.

This is what the regime probably planned for the 2020 presidential campaign, but the scale of post-election protests and the inability to censor Telegram channels or independent media made the regime increase the scale of repression to an unprecedented level, keen both to retain power and to show the Kremlin its “strength.”

One of the biggest enemies of the regime is the independent press, as Raman Pratasevich’s arrest demonstrated. Just a day after the Ryanair jet was forced down in Minsk, Lukashenka signed changes to several laws that will tighten the grip on media and civil society. They make it impossible for journalists to cover unauthorized street protests without being considered participants, will allow regional prosecutors to block any website they deem “extremist” and give Ministry of Information a right to shut down media outlets without a court’s agreement.

The new laws will also strengthen the punishment for another “enemy”: civic activists. It increases fines for unlawful gatherings and prohibits fundraisers from helping victims of repression. This blanket measure is needed since for the first time in many years the government is dealing not only with known activists, many of whom now live in neighboring countries, but also with hundreds of thousands of Belarusians who dared to support pro-democratic forces, either in the streets or on social media.

One of the ways to stop this exchange of ideas and resources with neighbors was to close the land border. Since late 2020, under the pretext of a covid-19 safety measure, Belarusians are permitted to cross the land border only twice a year and only with a valid reason like an employment contract.

Those who needed to go to the West chose to fly, but now with Europe seemingly about to close its airspace, the people of Belarus are under increased psychological pressure. They now see Russia holding the doors open for them (including for international flights) and Russia’s leader as the first to meet Lukashenka following the Ryanair incident.

Meanwhile, the Belarusian dictator has demonstrated to opponents that he will adopt the most extreme and unexpected measures to achieve revenge.

As the EU freezes a promised €3bn investment package, only Russia and China remain as realistic investors. Both habitually attach political strings to their assistance. In this situation, the acceptance of the already-considerable ties with Russia becomes a forced choice which Lukashenka can use to justify the continuation of his unlimited power. Pushed further down this road, Belarus will lose the shaky status quo of an independent state and will tumble into the darkness of human rights abuse and repression, much like Russia.

Europe and its transatlantic allies should be able to offer clear engagement options for Belarusians: by opening doors instead of closing them. This can be done by extending the right of humanitarian visa holders to apply for work to the whole EU (this is currently offered only by Poland), by committing to continue flying into Belarus as long as the local authorities allow it (they were not the ones to start closing routes) and by creating sufficiently clear incentives, including economic, for the authorities to re-engage and avoid full absorption by the eastern neighbor. The latter should follow a conditionality approach, with concrete benefits being provided for concrete steps putting Belarus on the path to re-establishing rule of law.

Photo: A view shows an information board during a check-in for a flight of Belavia Belarusian Airlines heading to Minsk, the last one before Ukraine stops air travel with Belarus following the arrest of dissident journalist Roman Protasevich, at Boryspil International Airport outside Kyiv, Ukraine May 25, 2021. Credit: REUTERS/Valentyn Ogirenko 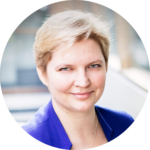