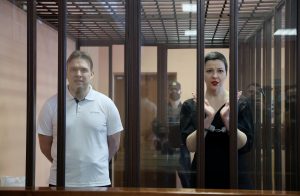 Photo: Belarusian opposition activists Maxim Znak (L) and Maria Kolesnikova, who are members of the Presidium of the opposition’s Coordination Council, appear for a sentencing hearing at the Minsk Region Court. The court found Kolesnikova and Znak guilty of conspiracy and participating in an extremist group and sentenced them to 11 and 10 years in prison, respectively. Belarus held a presidential election in August 2020. According to the Central Election Commission, incumbent President Lukashenko won. The first runner-up, opposition candidate Tikhanovskaya, refused to recognize the election results and fled the country. Later, Tikhanovskaya initiated the creation of the opposition’s Coordination Council, with an aim of coordinating a transfer of power from the incumbent president and organizing a new presidential election. After the 2020 Presidential Election, Belarusian Prosecutor General’s Office opened a criminal investigation against members of the opposition’s Coordination Council, accusing them of calls to seize power. Credit: Ramil Nasibulin/BelTA/TASS.