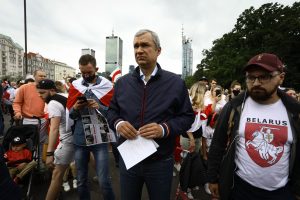 Photo: Belarusian opposition leader and former minister of culture Pavel Latushko is seen at an opposition rally in Warsaw, Poland on Augus 8, 2021. Several hundred people marched from the city center to the Belarusian embassy on Sunday in protest of political repression in their home country on the eve of the anniversary of the rigged elections that led to a sixth term of Alexander Lukashenko as president. Credit: STR/NurPhoto