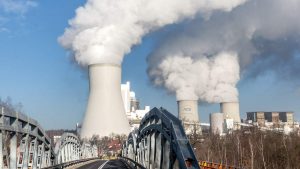 Photo: PGE Turów Power Station continous its usual operations as Poland is ordered to pay fines for its Turow complex – January 12, 2022 in Bogatynia, Poland. Turow open-pit mine and power station are located only few kilometers from both German and Czech border. Czech Republic launched a lawsuit in February 2021 against Poland saying that planned Turow mine’s expansion was damaging communities on its side of their border. Negotiations between Polish and Czech governments are as for today unsuccessful and will continue in January 2022. Poland refused to pay fines ordered by the European Court of Justice. Credit: Photo by Dominika Zarzycka/NurPhoto