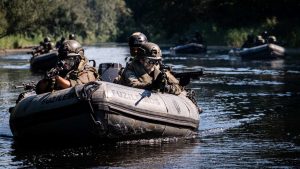 Photo: Portuguese marines train in Lithuania
For the Portuguese Fuzileiros, stealth can be key to securing their objectives. Using light Inflatable boats, or LIBs, Recon teams move quietly by water, keeping as low a profile as possible.

Portuguese marines (the Fuzileiros) and navy divers have been practising skills and tactics in Lithuania. The group is in the Baltic country for three months as part of NATO assurance measures which comprise land, sea and air activities in, on and around the eastern part of NATO’s Alliance. Credit: NATO