US Senator for Wisconsin, US Senate 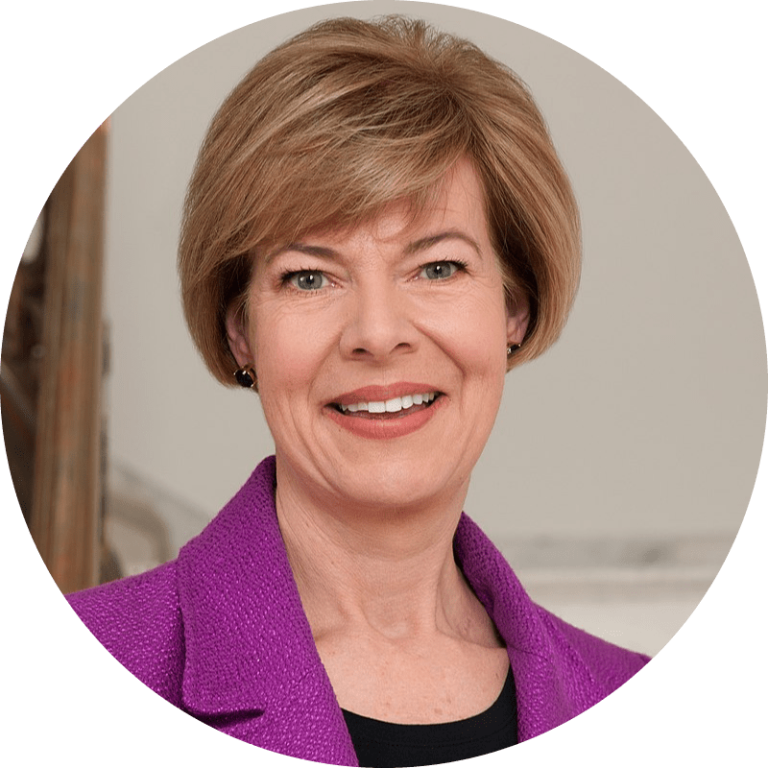 US Senator for Wisconsin, US Senate

Tammy Baldwin was born in Madison, Wisconsin and raised by her grandparents in the Badger State. Her grandfather was a scientist at the University of Wisconsin-Madison and her grandmother was a gifted artist and seamstress who became chief costumer of the University of Wisconsin-Madison Theater Department. Tammy was raised by her grandparents because her mother struggled with mental illness, chronic pain, and drug abuse. Tammy had to grow up fast, as her mother struggled with addiction to prescription drugs her entire life. When the opioid epidemic spread across Wisconsin, devastating countless families and entire communities, Tammy worked in the Senate to make sure Washington finally stepped up and supported local prevention, treatment, and recovery efforts throughout the state. She also authored and worked to pass the Jason Simcakoski Memorial and Promise Act, bipartisan legislation signed into law by President Obama that strengthens oversight of the VA’s opioid prescribing practices and provides safer and more effective care for our nation’s Veterans.

When Tammy was nine years old, she was diagnosed with a serious childhood illness similar to spinal meningitis. She spent three months in the hospital. Her grandparents had health insurance, but they weren’t allowed to list Tammy as a dependent. Their insurance wouldn’t cover her care, and they were forced to make great sacrifices to pay for Tammy’s health care. Tammy got better, and her grandparents looked for a health insurance policy that would cover her in the future. But they discovered that because of her previous illness, they couldn’t find such a policy. Tammy had been branded with the words “pre-existing condition.”

Now, because of the Affordable Care Act, championed by Tammy in the U.S. House of Representatives and in the U.S. Senate, children have protections that they didn’t have before and can’t be denied health coverage because of a pre-existing condition.

As her grandmother grew older, Tammy served as her grandmother’s primary caregiver – an extremely rewarding, but also challenging responsibility. Growing up in a grandfamily and being a caregiver shaped Tammy’s future in public service, and she led the bipartisan effort to support family caregivers by sponsoring and passing the RAISE Family Caregivers Act in the Senate which was signed into law in 2018.

Tammy graduated from Madison West High School and went on to double-major in political science and mathematics at Smith College. In 1989, she received her law degree from the University of Wisconsin Law School.

In 1986, while in law school, she served on the Madison Common Council, filling an aldermanic vacancy. Tammy was then elected to four terms (1986-1994) on the Dane County Board of Supervisors. In 1992, Tammy was elected to the Wisconsin State Assembly as a State Representative for the 78th District, serving three terms.

In 1998, Wisconsin’s 2nd Congressional District shattered the state’s glass ceiling and elected Tammy as the state’s first female member of Congress and the nation’s first openly gay challenger sent to Congress. She served seven terms in the House of Representatives, serving on the Budget Committee, the Judiciary Committee, and the Energy and Commerce Committee.

As a member of the U.S. House of Representatives, Tammy helped craft the landmark Patient Protection and Affordable Care Act, leading the effort to include the provision that now allows young people to remain on their parents’ health insurance plans up to age 26. She was also the lead sponsor of the Buffett Rule to ensure tax fairness, fought for student loan reforms to make higher education accessible and affordable, and developed a strong record of fighting against unfair trade deals that have shipped American jobs overseas.

In the Senate, Senator Baldwin is committed to working across party lines to strengthen the essential pillars of economic security for working families: investments in education and workforce readiness, building a strong Made in Wisconsin manufacturing and agriculture economy, quality health care for all Americans, and protecting the retirement security of today’s seniors and future generations.

Senator Baldwin has also made addressing the student debt crisis and college affordability a top priority. After holding roundtables with students and recent graduates struggling with the cost of a higher education, Senator Baldwin introduced the America’s College Promise Act to make the skills and credentials necessary for success in today’s economy attainable for all Americans, regardless of socio-economic status. Senator Baldwin’s legislation would create new federal-state partnerships to provide two years of tuition-free access to community or technical college programs.

As a leader in the Senate championing stronger Buy American policies, Senator Baldwin has worked across party lines to support our workers, manufacturers, and businesses. She has supported Made in America legislation, and pushed Presidents of both parties, to require the federal government to give preference to American companies and spend taxpayer dollars on American-made products and American jobs. Senator Baldwin worked to include Buy American reforms in the Infrastructure Investment and Jobs Act, which makes a historic investment to create jobs and rebuild America’s infrastructure. The bipartisan legislation invests in fixing our roads and bridges and rebuilding our water infrastructure, including help for local communities to replace lead service lines and address Per-and polyfluoroalkyl substances (PFAS) chemicals so that we provide safe and clean drinking water to people across our state. It also expands access to affordable and reliable high-speed broadband for Wisconsin families, students, small businesses, and farmers.

Senator Baldwin knows firsthand that Wisconsin farmers are the backbone of our rural communities. Representing America’s Dairyland, she has been a leader in the Senate supporting dairy farmers, cheesemakers, and food processors by working to pass legislation that provides them the tools they need to innovate, develop new dairy products, reach expanded markets, and move our agriculture economy forward. She also worked to make sure her bipartisan FARMERS FIRST Act was included in the 2018 Farm Bill, which provides funding for local mental health resources and expands access to stress reduction strategies and suicide prevention programs for people who work in agriculture.

In response to the COVID-19 pandemic, Senator Baldwin supported legislation to fund and distribute vaccinations, deliver stimulus checks and expanded tax cuts for working families, extend unemployment insurance to those out of work, and provide federal funding to small businesses, schools, and state and local governments to help them get through the public health and economic crisis.