Under Secretary for Terrorism and Financial Intelligence, US Department of the Treasury 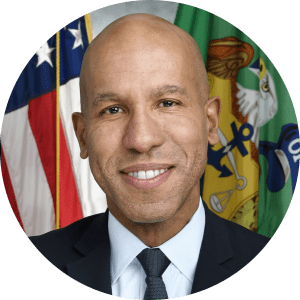 Under Secretary for Terrorism and Financial Intelligence, US Department of the Treasury

Brian Nelson is the U.S. Department of the Treasury’s Under Secretary for Terrorism and Financial Intelligence.

Prior to joining Treasury, Brian was the Chief Legal Officer at LA28, the organizing committee for the 2028 Olympic and Paralympic Games in Los Angeles. In this capacity, he was responsible for directing the efforts with local, state, and federal partners to make the 2028 Games secure, as well as lead LA28’s public-diplomacy work with various stakeholders.

His previous government service includes roles as a senior policy advisor, policy chief, and general counsel in the California Department of Justice. There, he oversaw key national security initiatives, including efforts to combat transnational criminal organizations, dismantle human trafficking networks, and build state and international partnerships to stop money laundering and high-tech crimes. Brian also led a number of efforts to enforce and then reform financial regulations in the aftermath of the national foreclosure crisis in the late 2000s.

Earlier in Brian’s career, he was a special counsel and then deputy chief of staff of the National Security Division of the U.S. Department of Justice. In those roles, Brian managed the flow of national security information critical to the Assistant Attorney General’s capacity to use intelligence and criminal authorities to disrupt terrorist threats in real time. One of Brian’s core responsibilities was also to oversee the economic national security work of the Division’s Foreign Investment Review Staff, which participates in the Treasury-led Committee on Foreign Investment in the United States.

Following clerkships at the United States Court of Appeals for the Ninth Circuit and the United States District Court for the Eastern District of Pennsylvania, Brian began his career at Sidley Austin’s DC office as an attorney in information privacy, national security, and appellate practices. He received his bachelor’s degree from UCLA and his J.D. from Yale Law School.