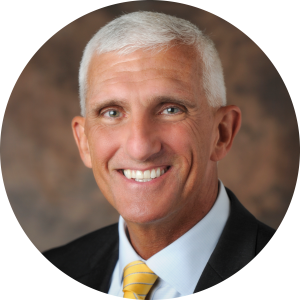 Lieutenant General (retired) Mark Hertling retired from the Army in December 2012, finishing his 38-year Army career as the Commanding General of US Army, Europe. He also commanded the Army’s 1st Armored Division and Task Force Iron in combat in Northern Iraq in 2007-8.

Hertling received a BS from West Point, an MS from Indiana University’s School of Public Health, and an MA from the National Defense University. In 2019, Mark received a DBA from the Crummer School of Business, Rollins College, defending research addressing physician leadership in the healthcare industry.

Hertling was a senior vice-president at a large healthcare system from 2012-2018, where he created a physician leader course and wrote “Growing Physician Leaders.” He continues to teach and speak at several health care facilities. He is an adjunct scholar of strategic leadership at the Crummer School of Business, Rollins College and he serves on the Dean's Alliance at Indiana University’s School of Public Health. Previously, he served on the President Obama’s Council for Fitness, Sport and Nutrition from 2014-2017, and recently he was appointed to the American Battle Monuments Commission by President Biden, where he serves as Chairman. He is also a military and national security analyst for CNN/CNN International.