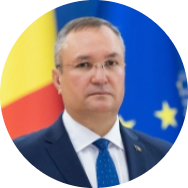 Nicolae-Ionel Ciucă was sworn in as the Prime-minister of Romania in December 2021, after serving as Minister of National Defence since November 2019. He retired from his military career in October 2019. As a career military, he served in various functions, as Chief of Defence Staff within the Romanian Armed Forces (January 2015 - October 2019), Commander of the 2nd Infantry Division (appointed in 2011), Commander of the Romanian Land Forces Staff (as of January 2014) and Deputy Chief of Defence Staff (as of October 2014). He took part in different operations and missions, both national and international, such as: UNAVEM III Angola in 1996 as a staff officer, Enduring Freedom Afghanistan (2002-2003) and Antica Babilonia Iraq (2004) as Battalion Commander. Nicolae-Ionel Ciucă graduated from Tudor Vladimirescu Military Highschool in 1985, and Nicolae Bălcescu Land Forces Academy in 1988. During 1993–1995, he studied at the National Defence University in Bucharest, and in 2003 he earned a PhD in Military Science. His education and training prepared him for his career and his further assignments in various positions, starting from platoon leader to battalion and brigade commander in 2011. Besides his education and training, he took part in many national and multinational (military) exercises, such as Blue Danube 2000, Dynamic Response Kosovo, ISAF 2003, and Eurasian Star 2010 in Turkey. During his entire career, Prime Minister Ciucă attended various training courses, of which the most relevant are:

Nicolae-Ionel Ciucă was born on 7th February 1967, in Plenița, Dolj county, Romania. He is married and has a son.