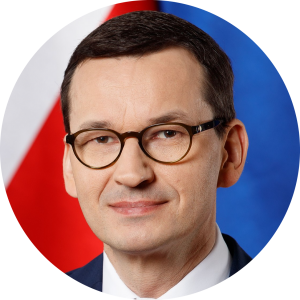 Born on June 20, 1968, in Wrocław. Polish politician and manager, former CEO of Bank Zachodni WBK. Mateusz Morawiecki is a graduate of the University of Wrocław, Business Administration Central Connecticut State University and the Wrocław University of Technology, MBA studies at the Wrocław University of Economics, University of Hamburg and the University of Basel. He started his professional career at Cogito Company in 1992. M. Morawiecki worked at Enter Marketing-Publishing in Wrocław in 1993-1996. In 1995, he completed an internship at the Deutsche Bundesbank, and from 1996 to 1997, he worked at the University of Frankfurt am Main. In 1998, he became Deputy Director of the Accession Negotiations Department in the Committee for European Integration and was a member of the group negotiating Poland's accession to the European Union (Banking and Finance). From 1998 to 2001, he worked at Bank Zachodni, first as an advisor to the President of the Management Board, then as a Member of the Management Board and Managing Director. In June 2001, Mateusz Morawiecki became a Member of the Management Board of Bank Zachodni WBK, and he was appointed President of the Management Board in May 2007. In 2013, he was awarded the Cross of Freedom and Solidarity for his merits for Poland's independence and sovereignty and respect for human rights. On June 23, 2015, he was awarded the Knight's Cross of the Order of the Rebirth of Poland for his outstanding merits in supporting and promoting Polish culture and national heritage.