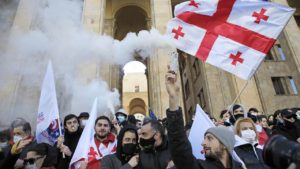 Photo: TBILISI, GEORGIA – FEBRUARY 23, 2021: People take part in a rally in support of Nika Melia, a member of the Georgian Parliament, outside the offices of the Georgian Parliament. Melia was arrested by officers of the Georgian Interior Ministry upon the ruling of the Tbilisi City Court. On February 17, the court ruled to put Melia back in custody for failing to pay a 40,000 Georgian lari [more than $12,000] bail in his case over civil disturbances during the June 2019. Credit: David Mdzinarishvili/TASS via Reuters Connect