It's time for new ideas from the Belarusian Opposition 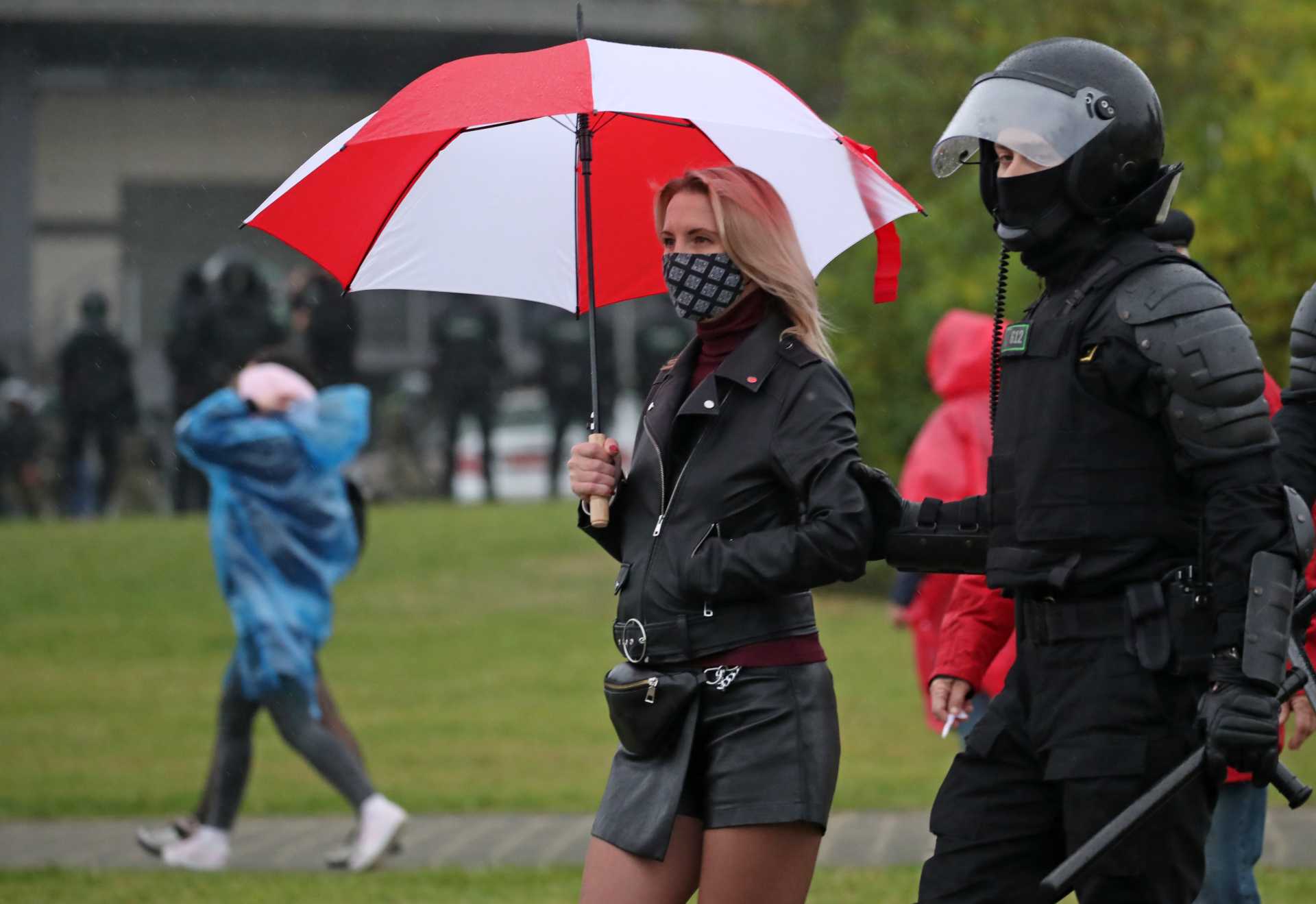 Photo: MINSK, BELARUS - OCTOBER 11, 2020: A riot police officer detains a participant in the March of Pride opposition event. Mass protests against the presidential election results have been occurring in Minsk and other Belarusian cities since August 9. According to the Belarusian Central Election Commission, incumbent president Alexander Lukashenko won by landslide with 80.1% of votes polled. Runner-up candidate Svetlana Tikhanovskaya who polled 10.12% refused to accept the election results and became one of the founders of the Belarusian opposition's Coordination Council. Subsequent rallies rapidly escalated into violent clashes with the police. Opposition activists call for further protest events, whereas the authorities demand to end them. Credit: Natalia Fedosenko/TASS.

The repressive machinery of the Belarusian state is now in high gear. Courts are handing down heavy prison sentences for minor infringements, such as throwing a flower at a police officer or scrawling graffiti. Two journalists received two years in jail for reporting on a rally. Security services are sifting through CCTV footage at companies and public institutions – and anyone spotted in a protest is being fired. Even within the security agencies, stories seep out suggesting purges of those suspected of disloyalty. The entire KGB Constitutional Order department was sacked, while retired officers criticizing the regime have been stripped of their privileges.

New repressive amendments to a range of laws have further penalized various forms of protest and criticism of the government. The law on extremism is expected to soon categorize as “extremist” any activity viewed as critical by the regime, and allow the authorities to keep a register of “dissenting individuals.”

Lukashenka personally ordered the closure of popular restaurants and cafes as well as over 200 other service businesses which had followed the opposition’s call to strike last October. Even big businesses are under attack — a popular supermarket chain had to close down following the arrest of the owner, who is suspected of donating to support protestors. The siloviki, who have become increasingly dominant, are proposing to tighten the rules and raise taxes for the self-employed.

All this is intended to scare off anyone brave enough to challenge the regime. The exiled opposition leader Sviatlana Tsikhanouskaya has called for large protests to resume on March 25, the date on which Belarusian civil society celebrates a free and democratic Belarus. Tsikhanouskaya’s recently presented Victory Strategy maintains that a new wave of protests will lead to Lukashenka losing his remaining support, forcing him into talks with the opposition by the summer.

It will be, however, very difficult to scale the protests up to a substantial level, bearing in mind the current degree of repression. Inside Belarus, many of the regime’s opponents are depressed and skeptical of Tsikhanouskaya’s plan. They see it as badly thought through and devoid of realistic tactics that could ultimately make the regime wobble.

This is eroding Tsikhanouskaya’s credibility in Belarus. While the authorities are learning how to effectively suppress dissent, the opposition’s emphasis on protests exposes its weakness and its lack of effective levers. A December messenger-based poll showed that 41% of Belarusians supporting the protest movement do not take part in it for fear of violence and jail. People are also disappointed with the meager impact of Western sanctions against the regime and feel frustrated with what they consider pointless tours of European capitals by Tsikhanouskaya.

It is certainly important to lobby Western institutions and governments, in order to maintain the pressure on the Belarusian regime. But it is also essential for the opposition to embark on the painstaking political work of building networks of trust and solidarity on the ground. Modern communication technologies help opposition leaders to stay in touch with communities in Belarus. But what is currently lacking from the opposition is leadership, management, and creativity.

From their safety abroad, opposition leaders could think of creative ways of building civic engagement inside Belarus that need not compromise people’s safety. Serbia’s Otpor youth movement started the fight against Slobodan Miloševi?’s rule by making their “clenched fist” a visible and recognizable symbol of resistance across the country. Next, it organized a slow down of people and vehicles at a certain time of the day. Such activities helped Serbians to see how many of them did not support Miloševi?’s policies and boosted their morale.

With administrators of local Telegram channels and other community leaders in Belarus under constant harassment by the security services, the opposition abroad should take on more responsibility for organizing and managing civic campaigns inside Belarus. On the ground, activists need to gain experience in learning leadership and discipline, mustering resources, setting priorities, winning allies, making demands, consolidating gains, and managing setbacks.

The Co-ordinating Council, a civil society structure set up at the start of the crisis in August, is doing some useful work along these lines. It has grown into a multi-branch structure, with various professional offshoots, comprising leading names in particular fields. It is earning credibility and recognition among the public. It carries out diverse work aimed at building civil society and developing policies for a new Belarus. For example, it launched a Messenger-based voting procedure to elect around 150 “people’s deputies” and held an online streamed assembly, in which the elected debated ideas with the larger public.

The Coordinating Council is talking about establishing a party or movement. It should do so, even though this step would risk attracting the attention and ire of the authorities. As last year’s protests failed to bring down Lukashenka, the opposition needs to prepare for new opportunities. These could be local elections due between December and January 2022, or potentially a referendum on a new constitution at about the same time. Now is the time to start preparing for these events.

The opposition needs to define itself as a force not only opposing the regime but also as committed to clearly articulated democratic principles, knowledge of which remains largely lacking in Belarus. Canvassing door-to-door and buying data to facilitate the creation of advertising in social media that targets specific audiences could prove effective in Belarus. The opposition should seek to erode the lower echelons of the regime by encouraging sympathizers to become involved. That would certainly be difficult, but combined with other efforts to build civil society and formulate new democratic policies, such action could help to create a parallel polity in Belarus, based on modern democratic principles, which would gradually grow in strength.