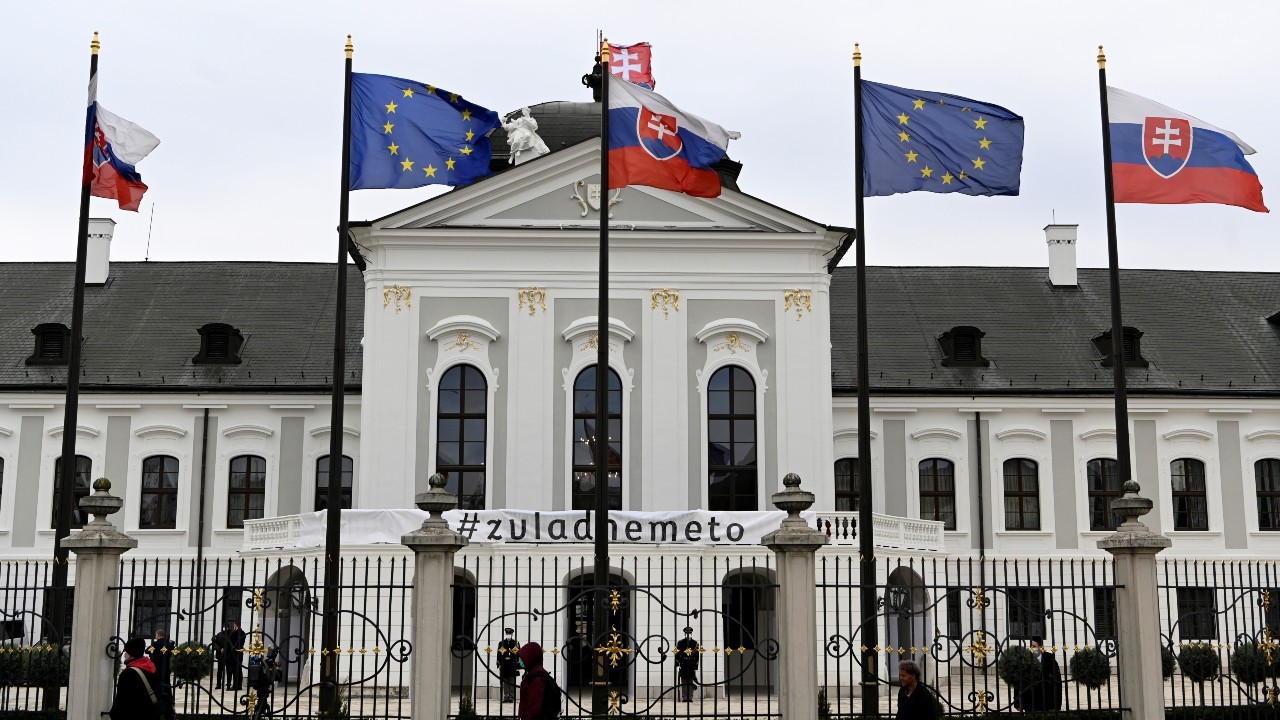 Photo: A general view of the Slovak Presidential Palace ahead of the cabinet's inauguration, in Bratislava, Slovakia, March 21, 2020. Credit: REUTERS/Radovan Stoklasa

In the years following Russia’s annexation of Crimea and throughout the long-simmering conflict in the eastern Ukraine, NATO’s security reassurances and adaptation measures on its eastern flank were met with a massive increase of malign influence operations in Central Europe. In August 2018, for example, a database of websites identified as spreading dubious and false content in Slovakia contained 118 websites. That number has only grown. Today it contains 204. In addition, more than 1,500 Facebook pages and public groups have been identified by social-media monitoring tools spreading problematic content in Slovakia.

The goal of these diverse disinformation ops has been the spreading of anti-NATO narratives often connected with anti-US narratives. The efforts we have documented in Slovakia provide a good snapshot for understanding tactics used more widely.

In 2017, the transit of an allied military convoy of allied forces through the eastern part of Slovakia was described as a preparation for a NATO invasion. Indeed, one of the most influential disinformation outlets, Hlavné správy (Main News) compared the exercise to the invasion of Czechoslovakia in 1968 by the Red Army. Hlavné správy hired a journalist of Russian origin with connections to Rossiya Segodnya and Sputnik. The video of the passing convoy went viral on Slovak Facebook and was later published on a YouTube channel, News Front, as proof that the United States supplied Ukraine with military equipment via Slovakia.

Various political parties have also served as bearers of anti-NATO and anti-US narratives. The far-right neo-Nazi Kotlebists – People’s Party Our Slovakia has been collecting signatures for the referendum in Slovakia to leave the EU and NATO since the 2016 Brexit referendum in the United Kingdom. Public support for this political party remains strong, and they have been in the parliament since 2016. Their efforts have been featured in Russian media. Another important source for anti-NATO and pro-Kremlin sentiment has been the Slovak National Party (SNS), which was part of the ruling coalition from 2016 till 2020. The party leader and the former Speaker of the National Council, Andrej Danko, blocked the adoption of new security and defense strategies that identified Russia as a threat. He often visited Moscow and delivered speeches at the Russian State Duma, where he spoke about the need to develop pan-Slavic cooperation and praised the strategic importance of the Russian Federation for Slovakia.

Anti-NATO and anti-US narratives also flourished in the beginning of 2019 during negotiations over the Defence Cooperation Agreement with the U.S. which promised, among other things, $105 million to modernize and renovate Slovak military facilities. Several members of SNS, including the Minister of Defence, claimed that U.S. soldiers, as well as (nuclear) missiles, would be based in Slovakia. Such claims were disputed by the Slovak Ministry of Foreign and European Affairs (MFEA, which were leading the negotiations), as well as by the U.S. embassy in Bratislava. This public dispute between ministries, as well as various other false claims by members of parliament, had an impact on public perceptions. In March 2020, 65% of Slovaks think that NATO bases in Slovakia would be tantamount to U.S. occupation.

The good news is that a robust strategic communications strategy can make a difference.

For years, Slovak public institutions did not actively engage in strategic communication (StratCom). The majority neither created nor disseminated narratives that would raise awareness of the geopolitical priorities of Slovakia or that would improve citizens’ resilience to misinformation. In many institutions, long-term priorities were not systematically communicated. The result was lowered support of EU and NATO membership, with high numbers of Slovak citizens particularly vulnerable to planted conspiracy theories.

A breakthrough came in 2017, when a StratCom unit was established at the MFEA and an internal, classified strategic document on strategic communication was adopted. The main objective of the StratCom unit was to develop long-term, systematic communication strategies aimed at building and raising public support for Slovakia’s pro-European security orientation. MFEA, along with a few public servants from other ministries and with the help from the civil society sector, have been the leaders in strategic communication in Slovakia over the past few years, conducting communication campaigns including #WeAreNATO and drafting policy changes. The establishment of new structures and the adoption of new security and defense strategies became one of the priorities of the new government in March 2020.

Such efforts paid off. For the past two years, GLOBSEC has observed a steady growth of support for NATO membership among Slovaks. In 2017, only 43% of Slovaks would have voted to stay in NATO in case of a referendum, while in 2020 it was 61% — an 18% increase. After March 2020, many public institutions have established StratCom capacities and are getting better at communication with the public, which is reflected in a steady increase in the number of followers on their social media accounts.

While many still believe various disinformation — for example, 49% think that NATO is an aggressive organization and a tool for the U.S. to control other countries — the support of Slovak NATO membership has solidified to a point where it is no longer in play.

In times of crisis, this approach is critical. Especially during the pandemic, for example, good strategic communication by public authorities vitally builds public trust in institutions, and can lead to higher compliance with lockdown measures by citizens. The willingness to get vaccinated against COVID-19 is considerably higher among those people who trust public authorities. It’s time, therefore, for StratCom to become an even more widespread “best practice” in democracies. Our institutions need to start actively engaging with the public in order to increase our resilience to malign influence operations. National security is bigger than just foreign policy.