Russia’s regime has a well-tested bag of tricks to confound the will of the people. 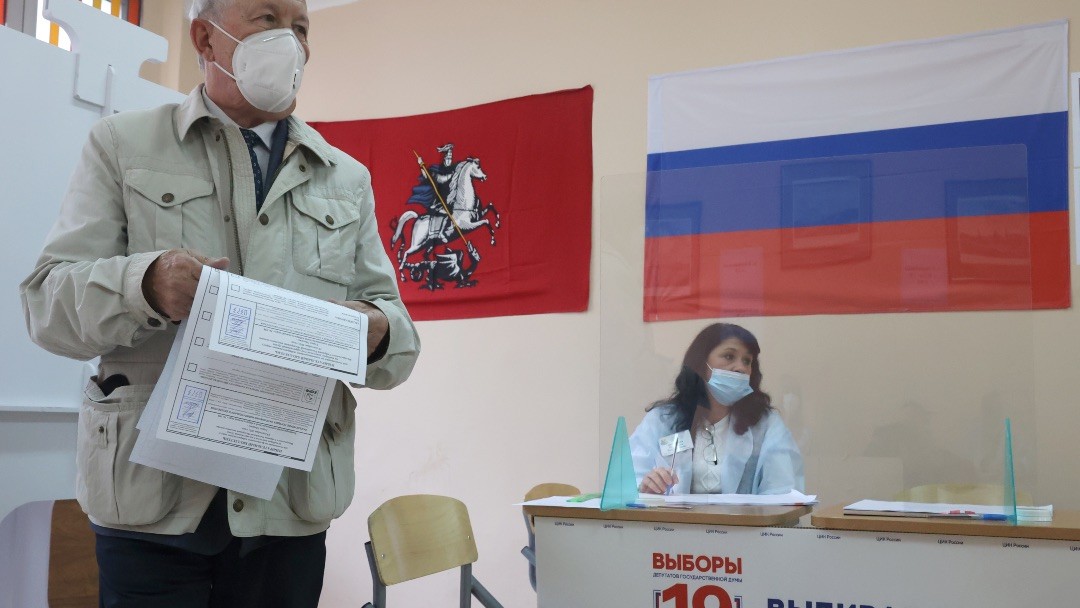 Image: MOSCOW, RUSSIA - SEPTEMBER 17, 2021: A man votes in the 2021 Russian parliamentary election at polling station No 374. Russia holds legislative elections on 17-19 September 2021; voters will go to the polls to elect members of the Russian State Duma. Credit: Gavriil Grigorov/TASS.

Voting in Russia’s legislative elections begins today (September 17) and continues to Sunday, in what is one of the most repressive elections in decades, even as the covid-19 pandemic surges across the country.

President Vladimir Putin himself is in quarantine (reportedly after being exposed by people in his inner circle), and given the huge numbers affected by the virus, turnout may fall. In the latest polls, Putin’s United Russia Party has the support of only 26% of Russians but is expected to retain its legislative majority due to massive fraud and Soviet-style crackdowns on opponents in the run-up to the vote. The governing party’s unpopularity is easily understood — declining incomes, soaring food prices, and the extraordinary mishandling of covid-19 have caused serious difficult economic problems.

Putin’s two-decade rule has been characterized by ever-more audacious election fraud, many of them familiar from authoritarian governments around the globe: tactics include the intimidation and disqualification on false grounds of opposition candidates, the intensive use of state media to promote preferred candidates, the banning of independent poll observers and their replacement by pro-regime individuals, installing election commissions subservient to the regime, and the misrepresentation of vote tallies. It has always been difficult for opposition figures to get on the ballot, but is even more so this year, as new laws and harsh crackdowns have prevented many associated with jailed opposition leader Alexei Navalny from standing. Navalny, who was poisoned with the Novichok nerve agent in August 2020 and jailed upon his return from recovery in a German hospital in January, has seen his anti-corruption organization shut down after it was labeled an “extremist organization.”

In March, as opposition and other independent politicians gathered for a forum of municipal deputies from across Russia, police detained approximately 150 attendees, vaguely accusing them of being associated with and conducting “activities of an undesirable organization.”

Putin’s government has devolved electoral manipulation and fraud by putting heavy pressure on regional governors (who are appointed directly by Putin) to produce desirable election results for the central government. This has resulted in pervasive fraud in previous elections and referendums. During last year’s referendum on constitutional changes, which gives Putin the option to maintain power through 2036, the prominent statistician, Sergei Shpilkin, published statistical evidence of unusually high turn-out, suggesting approximately 22 million fraudulent votes being cast (about 25% of the total.) His prior published statistical evidence, during the 2011 State Duma elections and the 2018 presidential election that handed Putin his fourth term, suggested widespread voter fraud, as well.

Other practices have included running Putin’s United Russia candidates as “independents” or under different party banners, making it virtually impossible for voters to know which candidate on the ballot is backed by United Russia. This practice was seen during the 2019 nationwide regional elections when the party did not nominate a single candidate for the Moscow City Duma elections. This year, a more creative method is being deployed in St. Petersburg, where voters will be deliberately confused when casting a ballot because three candidates — one a genuine opposition figure, and the others pro-regime — will have the same name on the ballot paper, Boris Vishnevsky, and all have the virtually same appearance.

Putin’s march to authoritarianism has been a gradual process, and the remnants of a once-thriving free press are still able to reveal some details of the vote-rigging. In an explosive recording published by Novaya Gazeta,on September 3, municipal administration adviser Zhanna Prokopyeva, is heard telling election workers, that “the most important thing is to be cold-blooded and calm” as she gives directions to election workers on how to falsify election results and secure victory for a “certain party,” referring to United Russia. “We are interested in seeing a certain figure and a certain party — 42% to 45% on the party-list voting,” she told the group.

The regime has an established armory of such practices. One of many tactics used is the establishment of bizarre polling places, which even the best-informed voter could not know about. During the 2020 referendum, videos appeared on social media showing polling stations in the trunk of a car and in parks. During the 2019 regional election, Golos, an independent election monitoring organization, which has since been labeled a “foreign agent,” reported 1,708 polling violations across Russia.

None of this will be seen by foreign observers because they are effectively barred. The Organization for Security and Cooperation in Europe (OSCE) announced it will not send election monitors this year due to the Russian authorities imposing severe limitations on their work. Meanwhile, the Russian nationalist writer, Zakhar Prilepin, who fought in occupied Donbas, announced that he has brought 200 fighters from Donetsk to his hometown, Nizhny Novgorod, to “observe” the elections. As the ballot kicks off in such repressive conditions, Russians will vote to know that key political opposition figures will be absent from the ballot.

The majority of Russians know the vote has been stolen and they also know that they may end up jailed for speaking out against a regime that has already decided the result that will favor and flatter Vladimir Putin.