Instead of attempting an illusory grand deal that will set a new global standard, the transatlantic Trade and Technology Council should focus on solving its internal disputes. 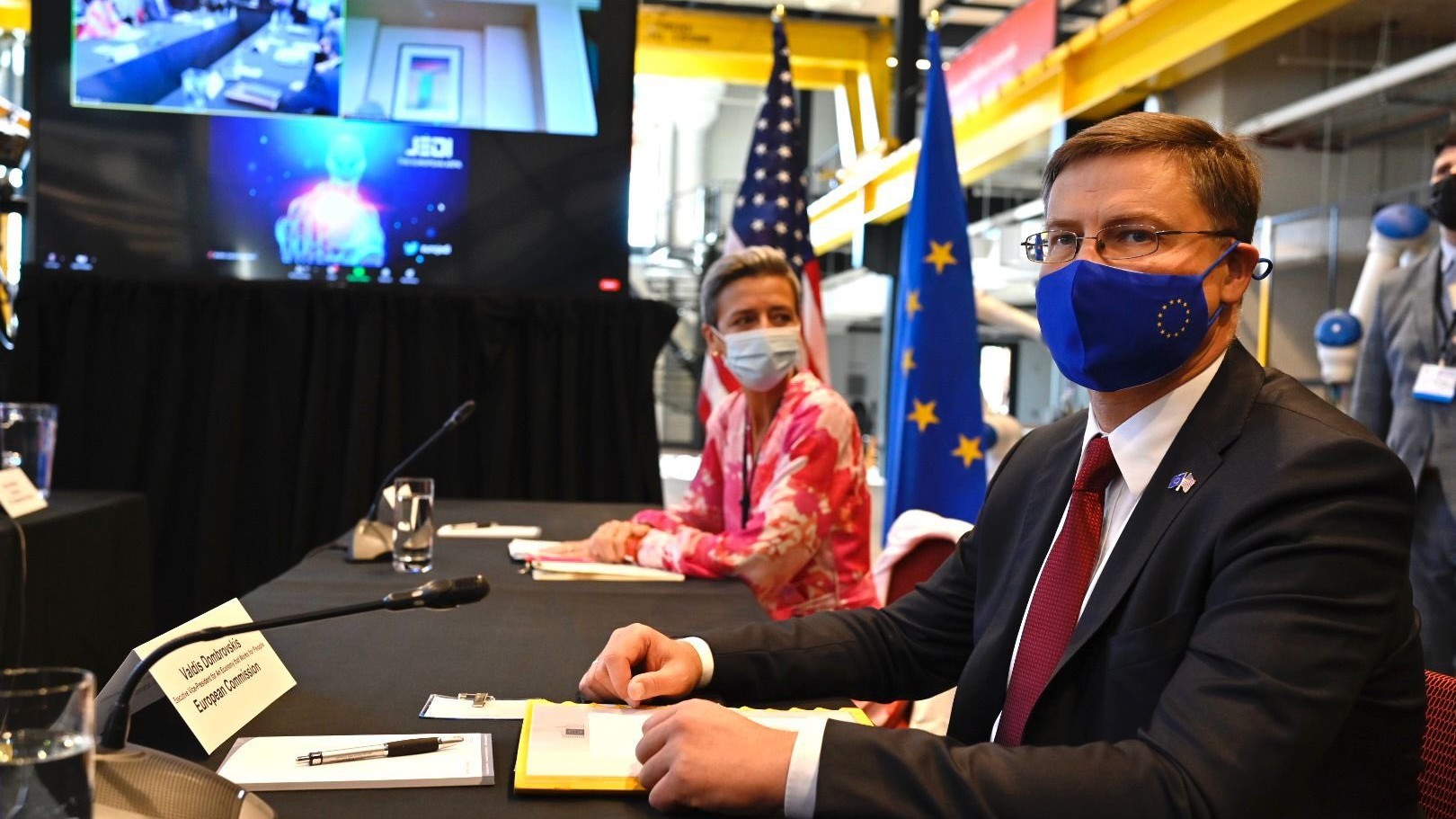 Data Privacy Reform Must Consider Civil Rights Giorgia Meloni Preaches Tech Nationalism. But Can Italy Go It Alone?  Europe Overegulates, US Abdicates – and China May Win the Race for Tech Supremacy The Splinternet is Here: How to Make the Most of it Tracking Chinese Online Influence in Central and Eastern Europe Russia’s Unlikely New Dissidents – Soccer Fans The Curious Case of Europe’s Potential Internet Traffic Tax
Explore

Instead of attempting an illusory grand deal that will set a new global standard, the transatlantic Trade and Technology Council should focus on solving its internal disputes.

Global tech rules have given birth to a confusing, unproductive and often conflictual alphabet soup of acronyms: DEPA, DFFT, GDPR, CPTPP. Now there’s a new acronym: TTC, the transatlantic Trade and Technology Council (TTC), which launches this week in Pittsburgh.

These new talks look set to face similar turbulence. Instead of attempting an illusory grand deal that will set a new global standard, Europe and the U.S. should focus on solving its internal disputes.

TTC is designed to counter China’s drive to set rules for global digital markets. Americans and Europeans aim to “coordinate approaches on key economic and technical issues by Europe and the U.S. – based on shared democratic values.” But the main challenge is not targeting China. It is finding a common ground across the Atlantic Ocean.

Despite its ambitious aims, TTC came close to imploding before its first meeting. A new defense pact between the U.S., UK and Australia torpedoed the purchase of French Barracuda-class submarines in favor of a nuclear fleet developed within the anglosphere.

The dispute reveals deeper cleavages than just the return policy on 50 billion euros worth of subs. A U.S., UK and Australian alliance challenges the military resource-sharing agreement between France and the UK, potentially crippling the French navy. It mocks the relevance of France in the Indo-Pacific. By extension, it undermines the EU’s regional influence since “EU in Asia” is effectively synonymous with just France.

Despite France’s objections, U.S. and European officials will meet in America’s steel capital. The supposedly infuriated French Commissioner Breton will not be there; he is secretly heading to Asia to secure semiconductor investments.

We shouldn’t blame France for feigning anger – that is just simply what any good politician does. Such theatrics enjoy a history at transatlantic talks. In 2013, the EU threatened to call off the inaugural negotiations on the Transatlantic Trade and Investment Partnership (TTIP) over the revelation of American surveillance of European leaders. The first rounds of talks happened anyway – only to be ended six, painful years later, before even coming close to the halfway point.

Like TTIP, Europe was the demandeur of the new digital talks. For Europe, the competitive advantage that the U.S. enjoys on the Internet, especially its online platforms, represents a longstanding irritant. It wants to leverage the talks to rebalance the equation. For Washington, Brussels is sometimes a veritable enemy that uses its soft power to legitimize digital protectionism across the world.

This tension has erupted into a spate of serious disputes. The European Court of Justice recently ruled the mechanism for transatlantic data transfers illegal, citing inadequate U.S. privacy safeguards. The judgement destabilizes $260 billion worth of transatlantic digital trade.

At its core, transatlantic digital friction is a bilateral commercial conflict disguised as global policy concerns. Whether the U.S. courts give adequate judicial redress to protect EU citizens’ privacy or whether U.S. platforms steal revenues away from European retailers is irrelevant to China or the rest of the world.

Before the Pittsburgh meeting, transatlantic working groups were making progress to resolve disagreements over export controls, 5G standardization (such as whether to subsidize the next generation Open RAN mobile phone infrastructure system), and old-fashioned trade disputes on steel or aircrafts. It would be a mistake for the U.S. and Europe to bundle these issues into a grand bargain. By aiming for an illusory Big Bang agreement, incremental improvement becomes more difficult. Big stages like TTC attract political attention that often incentivizes hostage-taking, blame games, and dramatic walk-outs.

Another reason for modest ambitions is the evidence that the two sides cannot even seem to agree internally on their own negotiating positions.  Before the Pittsburgh meeting, European ambassadors failed to reach agreement on a statement, sparring on issues ranging from semiconductor investments to how to reform the World Trade Organization. Washington cannot draft global rules with a European counterpart who suffers from both multiple personality disorder and buyers’ remorse. The U.S., for its part, refuses to reform its surveillance laws to allow a transatlantic data deal, and is hesitant in comparison to Europe about cracking down on Big Tech.

These criticisms are not meant to bury TTC before its birth. The TTC could be worthwhile if it relieves these bilateral transatlantic irritants from other multilateral forums. Take for instance, “the Trilateral”  – the formalized cooperation between the EU, Japan and the U.S. against Chinese trade practices. Until now, these talks have doubled as transatlantic marriage counseling sessions, wasting useful time on internal rifts rather than on addressing its supposed target, Chinese state capitalism.

The Pittsburgh meeting should not look to find impossible harmony. It should not be confused as a global digital governance forum. It should instead be used as a safety valve that allows progress elsewhere.

Hosuk Lee-Makiyama is director of the ECIPE, a Brussels think tank. Robin Baker is research associate at the London School of Economics.