Liberal Development at Stake as LGBT+ Flags Burn in Georgia 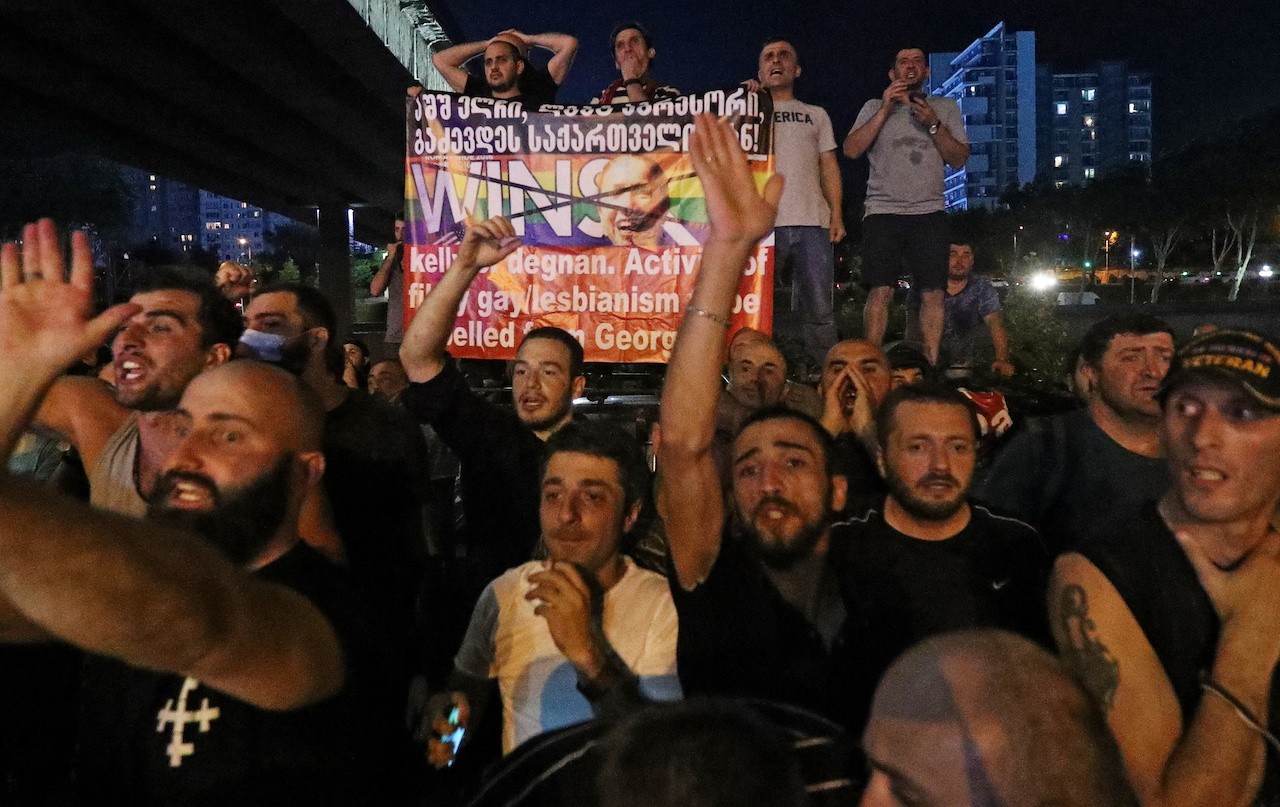 Georgia faces an anti-liberal challenge and it’s growing in complexity.

Protests against Georgia’s LGBT+ Pride parade turned ugly in Tbilisi on July 5 when members of the community were hunted down and attacked, around 50 journalists beaten up and the offices of various organizations vandalized. Tensions continued the following day, despite a heavy police presence.

On the face of it, the Georgian state condemned the violence. President Salome Zourabichvili was among the first with a clear statement supporting freedom of expression, members of parliament did likewise and the Ministry of Internal Affairs condemned any form of violence.

But behind the scenes, another less tolerant message had been spread before the attacks. Anxiety about this year’s events had been rising as a result of statements by the government and clergy. Prime Minister Irakli Garibashvili suggested the march “poses a threat of civil strife.” The Georgian Orthodox Church meanwhile condemned the event, saying it, “contains signs of provocation, conflicts with socially recognized moral norms and aims to legalize grave sin.”

For many, these statements signified tacit approval for the abuse of peaceful demonstrators. Meanwhile, the near-complete absence of security at the outset of the five-day event was all too obvious in Tbilisi’s streets and caused a public outcry. Many alleged the government was less focused on public safety than on upcoming elections where will need support from socially conservative voters and the powerful clergy, in a country where more than 80% of the population is tied to the Georgian Orthodox Church.

The violence brought a joint statement of condemnation from Western embassies. “Violence is simply unacceptable and cannot be excused,” it said. The Pride event was not the first and had previously been used by anti-gay groups. Violence was widespread in 2013 — and the reality of attacks against sexual minorities in Georgia remains ever-present.

In a socially conservative country such as Georgia, antagonism to all things liberal can run deep. Resistance to non-traditional sexual and religious mores divides society. This in turn causes political tension and polarization and can drown out discussion of other problems the country is marred in. It very obviously damages the country’s reputation abroad, where the treatment of minorities is considered a key marker of democratic progress and readiness for further involvement in European institutions.

That is why this violence should also be seen from a broader perspective. It is a challenge to liberal ideas and ultimately to the liberal world order.

A country can be democratic, have a multiplicity of parties, active election campaigns, and other features characteristic of rule by popular consent. But democracies can also be ruled by illiberal methods, used for the preservation of political power, the denigration of opposing political forces, and most of all the use of religious and nationalist sentiments to raise or lower tensions.

It happens across Eurasia, and Georgia is no exception. These are hybrid democracies with nominally democratic rule. Armenia, Georgia, Kyrgyzstan, and others have increasingly more in common, despite geographic distance and cultural differences.

Hungary too has been treading this path. Its recent law banning the supposed propagation of LGBT+ materials in schools must be repealed, European Commission President Ursula von der Leyen said on July 7. “This legislation uses the protection of children . . . to discriminate against people because of their sexual orientation . . . It is a disgrace,” she said.

One of the defining features of illiberalism is agility in appropriating ideas on state governance and molding them to the illiberal agenda.

It is true that a mere 30 years since the collapse of the Soviet Union is not enough to have built a truly liberal democratic state. Generations born and raised in the Soviet period or in the troubled 1990s still dominate the political landscape. This means that a different worldview still prevails. It favors democratic development but is also violently nationalistic in opposing liberal state-building.

Georgia’s growing illiberalism has to be understood in the context of the Russian gravitational pull. Blaming all the internal problems of Russia’s neighbors has become mainstream thinking among opposition politicians, NGOs, and sometimes even government figures. Exaggeration is commonplace, but when looking at the illiberal challenge from a long-term perspective, it becomes clear where Russia has succeeded in its illiberal goals. It is determined to stop Georgia from joining NATO and the EU. Partly as a result, the process drags on and this causes friction across society. Belief in the ultimate success of the liberal agenda is meanwhile undermined and alternatives are sought. Hybrid illiberal governments are the most plausible development. The next stage could well be a total abandonment of Euro-Atlantic aspirations.

The message of anti-liberal groups has also been evolving. There has been significant growth in their messaging. The anti-pride sentiment is evolving into a wider resistance to the Western way of life and Georgia’s Western foreign policy path, perhaps because it is easily attacked and misrepresented.

To deal with this, Western support is important, but much depends on Georgian governments and the population at large. A pushback against radicalism and anti-liberalism should come in the guise of time and resources for the development of stronger and currently faltering institutions. Urgency in addressing these problems has never been higher — internal and foreign challenges converge and present a fundamental challenge to what Georgia has been pursuing since the days of Eduard Shevardnadze – the Western path to development.