The towns near Kyiv which bore the brunt of Russia’s war of aggression are starting to work on reconstruction. 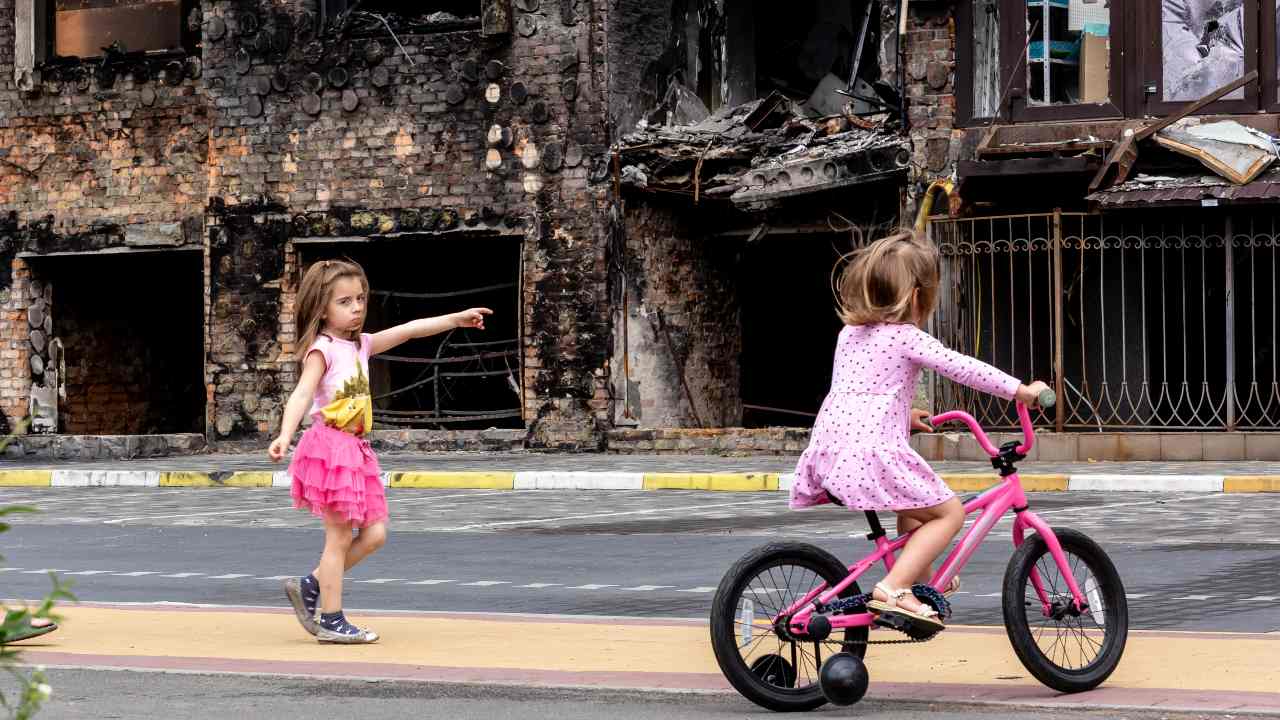 Photo: Two girls are seen in front a residential area affected by bombardment - June 14, 2022 in Bucha, Ukraine. As the Russian Federation invaded Ukraine more than 3 and a half months ago, fierce fighting continues in the East of the country. Some of the most devastated towns since the beginning of the conflict - Irpin and Bucha - build their way to normality. More and more civilians get back to their homes and reestablish their lives. Credit: Photo by Dominika Zarzycka/NurPhoto

School Principal Nadiia Ukrainets fights back tears as she walks around Lyceum Number 1 in Makariv, 50km (30 miles) west of Kyiv. There were 1,050 pupils here before the Russian invasion. Now it lies silent.

Windows are blown out, furniture is peppered with bullet holes, and the sun breaks through gaps in the roof and walls blasted by rockets and bombs, scattering masonry, tiles, and textbooks. Outside, there’s a crater in the sports field and mangled vehicles sit rusting among rubble and charred timbers in the parking lot.

The school is one of more than 1,200 educational facilities across Ukraine damaged by the war, and Nadiia is determined children from the surrounding villages and towns will once again return to learn.

Makariv and its citizens were badly mauled during a month of partial occupation. To the litany of destruction from the street, fighting was added a trail of shattered civilian vehicles destroyed by the occupiers, the remains of their passengers left within. The town is a symbol of the Herculean task facing Ukrainians as they seek to rebuild their country after Russia’s war of aggression, and a sign of how much help will be needed from the rest of the world.

“I sincerely believe in our victory and in the generations of our students yet to come,” says Nadiia, whose working day often stretches from 7 am to 11 pm. “I also trust in our Western partners and their help. We will do what we can, but Ukraine cannot recover by itself.”

“On February 24 at 6:30 am I was already at school. I told the teachers to stay home,” Nadiia says. “The kitchen staff were already there at 4:30 am, as always. I told them they won’t be working that day. The cook said “What do you mean? We prepared two buckets of fish yesterday!” We then decided to cook for the Territorial Defence, the Armed Forces, and the National Police.”

The school staff came in to help, continuing to prepare meals after power and mains water were cut off three days into the invasion. The school and its shelters housed 400 people and they carried barrels of water, cooked food at night, and slept very little for 12 days. Nobody washed or took a shower — every drop of water had to be saved.

Nadiia was evacuated on March 7 with the rest of the staff when the Russian forces dropped a bomb on the school. The people inside managed to escape, running through the burning wreckage and sheltering in a less damaged building. Later, territorial defense soldiers led them across the river, past the broken bridge. They left with nothing but their lives.

The school has lost two of its students. A freshman died with his father during the evacuation, and a 5th grade student “was shot dead in front of his 6-year-old brother together with his mother and grandpa,” Nadiia says. “His grandmother got severe burns but stayed alive and his little brother’s entire body was wounded. He escaped through the cornfields where a woman found him later.”

The school is concerned for a girl from the 10th grade who is still missing after the invading forces took her to Belarus and later to Russia. She tried to escape but there’s been no further contact with her, Nadiia says. Russia has taken more than 1m Ukrainians from their homeland, including 260,000 children.

The principal is committed to restoring classes for her pupils, and gradually rebuilding the school. Engineers have told her it would be safer and more cost-effective to start again rather than try to restore the bomb-damaged buildings so, while she fundraises for redevelopment, she plans to buy tents so children can study outside from September to November, then return in March after the coldest months of winter.

Online lessons are not straightforward in a country with infrastructure torn apart by war, and families in the rural areas do not have enough money to buy the computer equipment needed for home study. In many families, there are two or three children and, even if their family has a computer, they would have to log on one at a time and only if their parents don’t need the devices for work.

Longer term, Nadiia wants to return to the pre-war vision of an educational cluster, with an elementary school, a gymnasium, a museum, a lyceum, and sports facilities all located on the 2-hectare (5-acre) site. This would allow for a garden of more than 300 trees, half of which had already been planted.

To make outdoor education work in the meantime, she needs the money to buy tents, along with flipcharts, projectors, and other equipment, and is appealing to the international community for help. The school also needs a grant expert to teach how to successfully apply for cash to speed up the renovation, she says

At a Ukraine Recovery Conference in Lugarno, Switzerland, at the beginning of July, President Zelenskyy told delegates representing nations across the democratic world that his country would need $750bn for post-war reconstruction.

Lyceum Number 1, which before the war was involved in the European Wergeland Centre’s “Schools for Democracy” program, has experience with working across borders, and Nadiia hopes such Western aid and expertise will help it once again.

One of the features of the school which miraculously survived the shelling, is an avenue where every student planted their own rose when they graduated. Nadiia’s vision for the future, with Western help, is for many more roses to bloom.