Conflict in Donbas: What Does Ukraine Stand to Gain?

Most discussions on the risks of escalation in eastern Ukraine focus on what Russia may gain, with or without further military action. 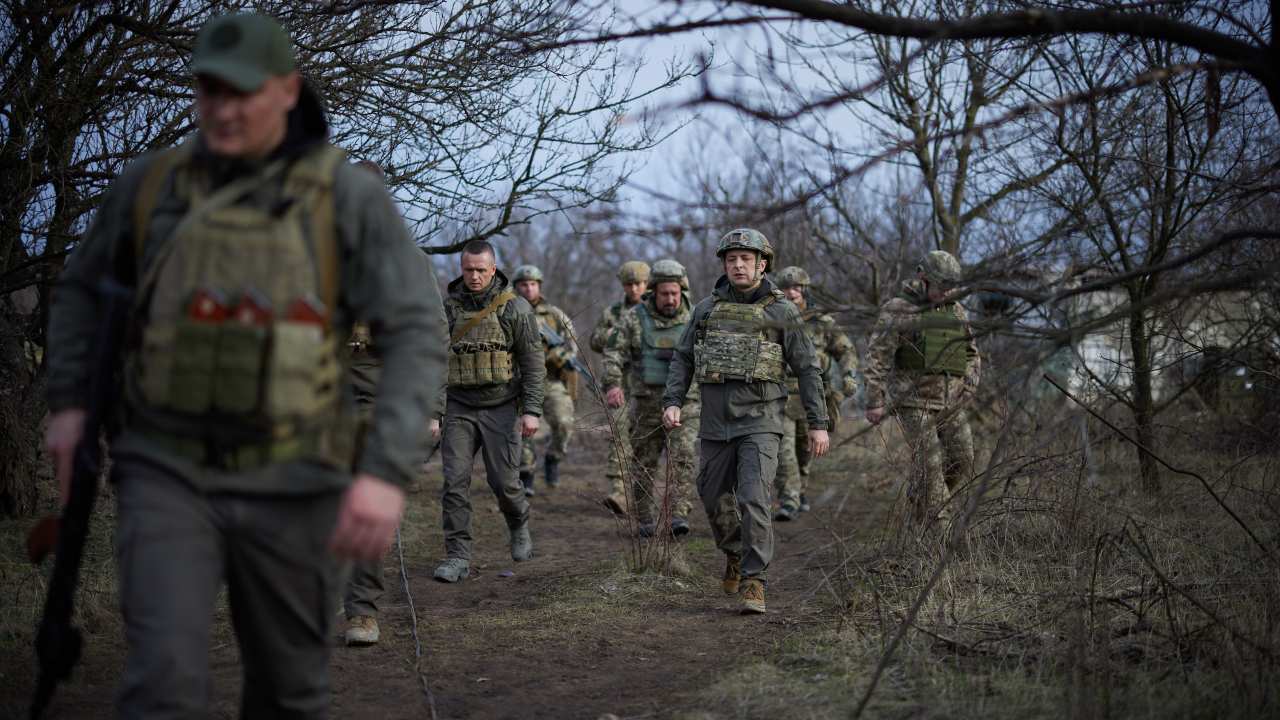 Russia continues to blame Ukraine for provoking the situation, with the deputy head of Russia’s presidential administration, Dmitry Kozak, Putin’s chief negotiator, recently accusing Ukraine of using Russia’s military moves as PR (although he admitted Ukraine is not seeking a full-scale war). This unwillingness to consider how Russia might have contributed to tensions itself is standard practice. But it is nonetheless worth considering, what does Ukraine stand to gain or lose from this situation?

It has been widely suggested that Putin might be using military might to distract from domestic problems. Yet in some ways this actually makes more sense for Ukrainian President Volodymyr Zelensky. Zelensky came to power promising to halt the violence on the frontline and to negotiate an end to the conflict. So far this has not happened in a sustainable way. Since his 73% victory in the 2019 presidential elections his rating has dropped. This was somewhat inevitable given the high starting point, but there have been disappointments. While there are acute domestic issues such as the IMF-mandated increase in utility payments and the government’s somewhat chaotic response to covid-19, Donbas remains a key issue for Ukrainian society.

A flare-up in the east could, arguably, distract from domestic issues. Yet, given Donbas itself is a domestic issue, it is unclear how this would play out. If anything, this might just show Zelensky’s inability to deliver on a key campaign promise.

So far, the revival of violence in eastern Ukraine has not created a new patriotic wave to boost Zelensky’s support. The most noticeable change in recent months was that Zelensky’s rating increased slightly after he sanctioned Victor Medvedchuk, a Putin ally, in February. Medvedchuk was already a rather toxic figure in Ukraine – one of the least-trusted figures in politics. Some of his business assets were allegedly linked to coal smuggling in eastern Ukraine, and separate sanctions led to the shut-down of three media outlets he was associated with.

While there will always be a concentrated, and seemingly influential, group in Ukraine that see themselves as patriotic by essentially rejecting any negotiated settlement or compromise with Russia, polls suggest the general population favors talks by a 5:4 ratio. As Zelensky’s pro-peace agenda becomes more complicated to implement, there is a sense that the “patriotic” voice has become louder. Yet the recent deterioration in the Donbas did not spark this.

Will Ukraine seek to recapture the so-called Luhansk People’s Republic (LPR) and Donetsk People’s Republic (DPR) by force? Hardly. There is a growing sense that, realistically, neither side is desperate to absorb this territory. The economic cost of rehabilitating it would be significant, although Ukraine has said it would commit to this with international help. Despite the DPR leadership wanting to join Russia, and Russian propaganda figures calling for the Donbas to “return”, President Putin does not seem keen on annexation. To do so would kill the Minsk Agreements, the cornerstone of Russia’s policy towards eastern Ukraine. Neither side has engaged in military action with this goal in the past few years, although of course it cannot be ruled out. It has been more about localized flare-ups. A few years ago the Ukrainian army conducted creeping advances into the so-called grey zone, but this did little to change facts on the ground.

Yet Ukraine can hope that the current focus on Russia’s military moves may rally Western support. Until recently, there was a sense of western fatigue with Ukraine’s failure to progress on reforms. Now its Western partners are coming out strong in their support for Ukraine’s territorial integrity and the Biden administration, a key relationship for Ukraine, is giving the issue more attention.

Zelensky has used the situation to promote Ukraine’s membership in NATO, speaking to NATO Secretary General Jens Stoltenberg, and lobbying the UK and Canada in particular. Russia has explicitly ruled this out, and its determination to prevent this is one of the key original drivers of the conflict. It is hard to believe, at this stage, that NATO would invite Ukraine to join. Rather than wanting to call Russia’s bluff, NATO will likely want to intensify cooperation with Ukraine without membership, whilst encouraging them to prioritize reform. It is hard to know what Western support might convert to, if anything, should things get worse.

All in all, Ukraine does not have as much to gain domestically or internationally from dangerous provocation as the Kremlin likes to say or some may think. Most of the risks seem to outweigh benefits, although that is not to say Kyiv will not try to muster all the western support it can.