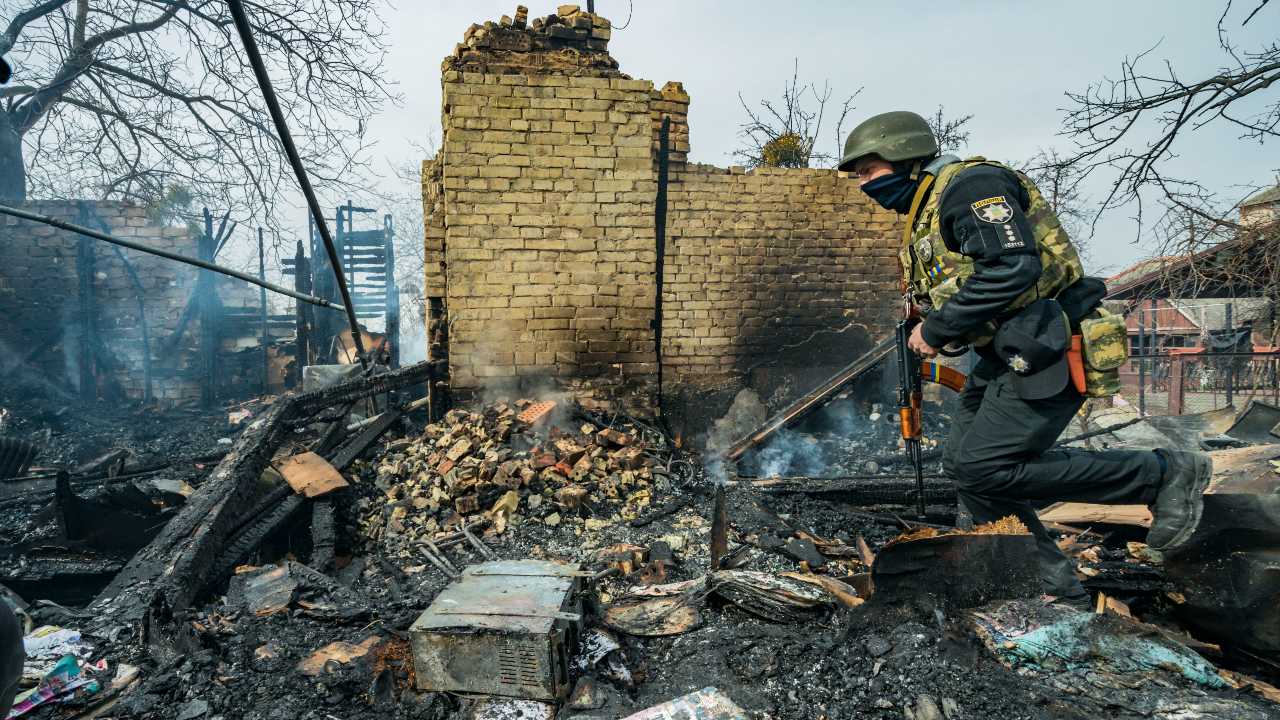 Photo: Ukrainian police checks a house in ruins by fire after the strikes of the russian artillery on Boyarka village, in outskirts of Kyiv. Credit: Celestino Arce/NurPhoto

What will Ukrainians remember from these traumatic weeks of 2022? Certainly the kindness of strangers. The response in neighboring countries, and in Germany, to the humanitarian emergency has been touching. I have just returned from Cracow: Poland’s cultural capital is full of Ukrainian flags, posters offering help, and homes hosting refugees. Moldova, Europe’s poorest country, has uncomplainingly shouldered an exceptional burden.

The efforts made to provide military support have been striking too. Estonia, a country of just over a million people, and with a GDP of $30 billion, has given six times as much military aid as Germany has, with a population of 80m and an economy 65 times larger. There are extraordinary acts of generosity by private citizens too: Lithuanians, for example, have been donating their personal SUVs for use at the front. People in these countries know what is at stake.

That will create lasting ties of friendship and loyalty. Iceland recognized Lithuania’s restored independence in 1991 when no other country dared to. To this day, Icelanders are treated as honored guests there.

The response is also reshaping Europe’s political landscape. Poland, the Czech Republic, Slovakia, and the Baltic states, along with the Belarusian opposition, are fiercely supportive of Ukraine. Only worries about breaching NATO unity are holding them back. Britain gives big-country backing to this grouping.

Hungary by contrast is out on a limb, refusing to allow military aid to cross its airspace. President Volodymyr Zelensky this week called out the Hungarian leader, Victor Orbán, for his hesitancy, asking “Which side are you on?” It may be that the upcoming parliamentary elections bring a change of power in Budapest. If not, resentments will be deep and durable.

Even more corrosive is the sense that the big members of the “old West” — France, Germany, and Italy — are not helping as they should. Even when these countries’ leaders speak boldly they act limply. The aid is too little, too late, and the wrong kind. The European Union institutions are little better. The changes are unprecedented, to be sure. But they are not enough. Russia’s war machine is grinding Ukrainian bodies and buildings to destruction every minute of every day. The lack of urgency in response is perplexing and infuriating. American political discourse, and the administration’s deeds, are also open to criticism — though Ukrainians wisely refrain from directly rebuking their biggest friend.

The wounds of the present are the scars of the future. It now seems clear that Ukraine will not be defeated. It may even emerge victorious, as Russia’s battlefield losses destroy military morale and stoke anger at home. But what will post-war Ukraine be like? Affection and gratitude will be fierce, but so too will be disappointment and anger. Ukrainians have demonstrated enormous trust in each other. They may well mistrust much of the outside world. Previous problems — corruption, poverty, weak institutions — will return, perhaps compounded by the lingering effects of the war. Politicized military veterans can play a destabilizing role in peacetime politics.

The right response to this will be speedy, decisive, and generous. Any peace deal may involve forswearing formal ties with NATO, so the EU will have to take the lead. Ukrainians fought and died for Europe’s freedom and security. If the rules do not allow speedy accession, they should be changed. An interim solution would be Ukrainian representation in EU deliberative and decision-making meetings, even before formal membership is achieved. Peace should also mean international financial support for the restoration of public services and infrastructure. Europe’s poorer and braver countries are helping win the war; the richer, more timid ones must win the peace.