A Centenary of Shame

Mark the CCP’s anniversary with the “Taiwan tiptoe” 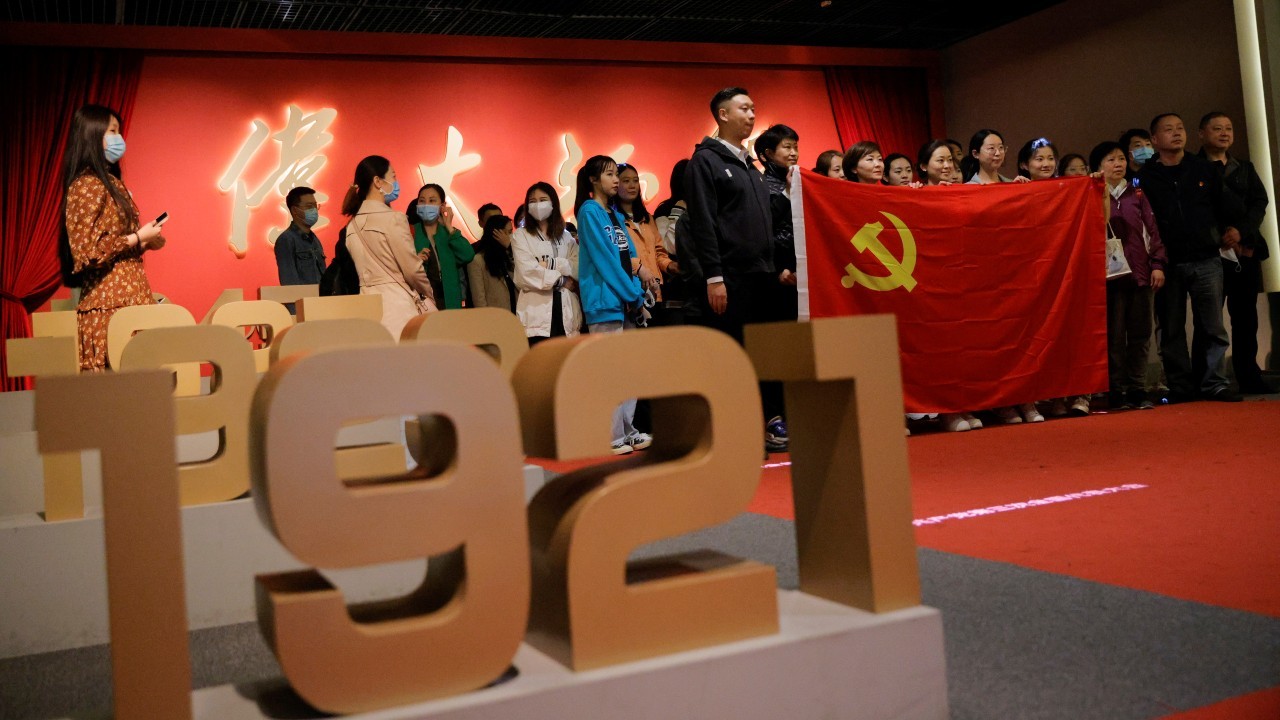 Photo: People hold the Chinese national flag as they pose for a group picture at an exhibition marking the 100th founding anniversary of the Chinese Communist Party (CCP) in Beijing, China, April 22, 2021. Credit: REUTERS/Thomas Peter

The Chinese Communist Party is 100 years old on July 1st. The party-state’s bureaucrats and hangers-on will be celebrating that with their usual bombast.

Everyone who is fortunate enough to live in freedom should mark the anniversary too — with steps to ensure that there won’t be many more.

For a start, be grateful. None of the problems of countries that live in Russia’s shadow come close to the suffering of the Tibetan, Uyghurs, Kazakhs, Mongolians, and other ethnic minorities under the chauvinist rule of the party-state. Plenty of Chinese suffer too, especially religious believers, free-thinking intellectuals, and anyone who sticks up for their rights. Arbitrary arrest, censorship, deculturalization, deportations, and other torments experienced at Soviet hands are, thankfully, now fading from living memory in the Kremlin’s former empire. But they are happening right now in China.

People with money can donate it. Those with time can spare that too. Elected representatives should do more (or something) against the Beijing regime or on behalf of its victims. Political prisoners range from the 11th Panchen Lama, kidnapped as a child,  to the “two Michaels” — Canadians held hostage in harsh conditions. Municipal leaders can rename streets and other landmarks. The Budapest municipality has just done this, with roads named in honor of the Hong Kong protestors, the Uyghur martyrs, and the persecuted Catholic bishop Xie Shiguang.

But perhaps the most effective issue involves Taiwan. The mainland is salami-slicing the credibility of the island democracy’s defenses. Air and sea intrusions are increasingly big and bold. If Taiwan retaliates, it risks an escalation in which it is the loser, probably with a blockade. If it doesn’t retaliate, then it looks like a pushover. The ambiguous bilateral security guarantee from the U.S. comes under increasing strain.

Europe could help. Sending naval vessels into the Taiwan straits, for example, would show the Beijing regime that this is not just a U.S.-China issue. France, Germany, and Britain could do this. But don’t hold your breath.

Even countries without blue-water navies can help on other fronts. I suggest the “Taiwan tiptoe” — lots of countries taking steps, even small ones, to improve their relations with the authorities in Taipei. Elements of this include:

Individually, none of these is a gamechanger. But together, they all help puncture the mainland taboo, and make it easier for other countries to take similar steps. If enough countries follow suit, they can change the risk calculations in Beijing.

We can also help Taiwan with training in political warfare. For years, the political culture there has been cautious, bureaucratic, and deferential. Now it needs to be agile, bold, and dynamic. Countries with long experience in dealing with Russia have plenty to offer here. So host Taiwanese officials, journalists, and activists in our thinktanks, editorial offices research centers, and government agencies — and help get Taiwan ready for primetime.