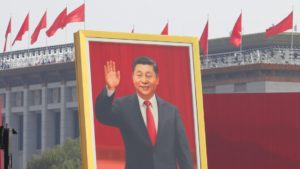 Photo: The portrait of China’s President Xi Jinping appears during a military parade to celebrate the 70th anniversary of the founding of a nation at the Tiananmen Square in Beijing, China on October 1, 2019. New weapons were unveiled at the largest military parade ever. ( The Yomiuri Shimbun ) Credit: REUTERS